The Ledge at Sears/Willis Tower Opens to the Public 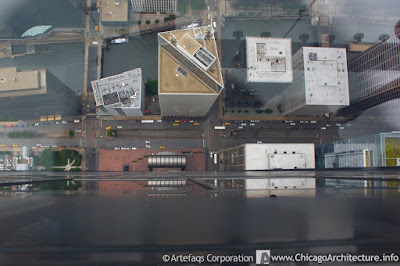 It’s not often that a new tourist attraction opens that is guaranteed to be seen by millions of people each year.  Such Chicago gimmies as Millennium Park, Cloud Gate, and the Shedd Aquarium have all had their naysayers who predicted that no one would care and no one would ever see them. 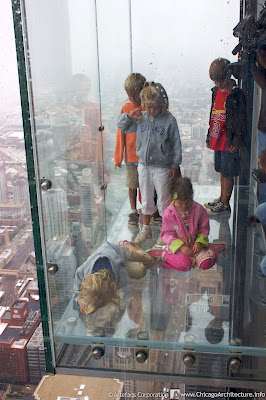 This time it’s different.  The new glass ledges installed in the facade of Chicago’s tallest building are guaranteed to be an attraction.  That’s because the observation deck that is their home is already one of the largest tourist attractions in the Midwest.

The Skydeck Ledge, as the four glass pods are collectively known, fulfill something that’s always been something of a half-joke / half-wish among Willis Tower (formerly Sears Tower) visitors: to see the building from the outside.  Even Ferris Beuler and his friends once stood with their heads against the glass.  That glass is no longer a barrier.

Now it is actually possible to step beyond the building’s curtain wall and look left, right, up, back, and most terrifyingly — down 1,353 to South Wacker Drive below.

It really is a fascinating and unique experience.  It’s nothing at all like other glass floors I’ve been at places like the CN Tower in Toronto, or The 63 Building in Seoul.  This isn’t just a piece of plexiglass popped into a hole in the steel.  This is actual white glass hovering outside of the building’s main structure.

The glass is crystal clear and even though it’s tempered, it lacks most of the greenish tint you’re used to seeing in tables and other furniture made with similar material.  Unlike pretty much every other “glass” floor in skyscrapers around the world, this one is actually glass, not plastic that gets scratched and scuffed so much that it’s hard to tell what you’re looking at.  The floor of each of the four pods has an additional layer of “sacrificial glass” on it to absorb the scuffs, dings, chips, and dirt that come from millions of yearly tourists.  When this layer gets sufficiently scratched, it can be removed and replaced, thus preserving the view.  It’s a far superior solution than is used on the glass walkway over the Grand Canyon.  There, people are required to don little fabric booties to keep from scratching the bridge.  The designers of The Ledge decided doing the same thing in Chicago would detract from the magic of the experience. 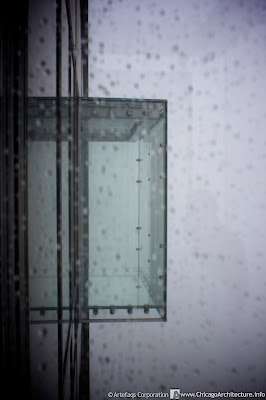 The way the pods seem to hover in mid-air is certainly magical, but “hover” is probably not the right word. “Hang” is better, because that’s what they do.  Each of the pods is a five-sided box hanging from a steel truss projecting from the ceiling out into free air.  There is no reassuringly supportive steel frame to look at while taking in the views of the city below.  That’s all done above you, and in a way that you hardly notice it, until you’re safely back inside.

Once safely back in Skydeck Chicago (formerly known as the Sears Skydeck), you can see the mechanical system in the ceiling.  It allows the pods to be smoothly retracted back into the building for cleaning and maintenance.  The mechanism is similar to ones used to move sets around at plays, so it’s able to move very heavy objects with precision.

And the pods are heavy.  Each of the sides is formed from three layers of glass bonded together.  They are designed to hold at least 10,000 pounds.  But even though they’re mostly glass, the ledges are incredibly strong.  In early testing done on the 103rd floor, the glass was deliberately broken.  But the bonding material was enough to maintain the structural integrity of the pod and support its load. 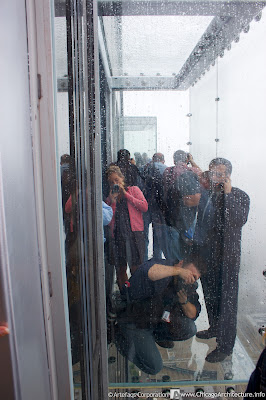 Q: How many news reporters and photographers can you fit in a ledge?
A: All of them!