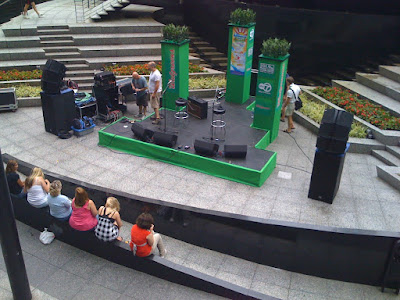 A group of Collective Soul fans stake out their patch of front-row real estate for today’s concert in the sunken plaza at the John Hancock Center more than four hours before the band is scheduled to perform.

Later in the day, Collective Soul will perform at Old Saint Patrick’s Church’s annual summer festival.  OSP likes to call it the “World’s Largest Block Party,” but it’s not.  It’s not even the largest in the Midwest.  But don’t mention that to people who run the church.  Hostile and dismissive responses are de rigeur any time we’ve brought that up to the bosses over there.  Even from pastor Father Tom Hurley, who sent us a nastygram when we most recently inquired about the false boast.