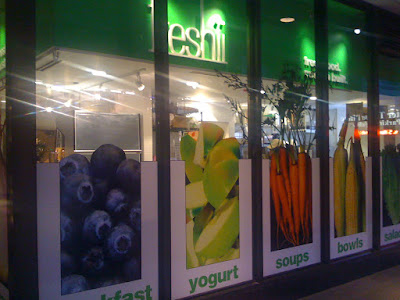 The new Freshii is now open at Water Tower Place.  It’s in the space that was once a Nuts on Clark outlet. We told you last year about Nuts being shelled from its Gold Coast location.  The new eatery takes us from nuts to fruits and vegetables.

Interestingly, the smart folks at Freshii have found a way to make use of the old carport at Water Tower Place.  The four-lane through street used to allow people to be picked up and dropped off from both the mall and the Ritz-Carlton Hotel safe from Chicago’s weather.  But worries over car bombs closed that route long ago.

Now it’s being used by Freshii as an outdoor seating area, and should be perfect for a little al fresco dining, even if it’s raining.