Kiosks Vanish in the Gold Coast

Editor’s note:  This article was scheduled to run on Monday, but since Crain’s moved its version tonight, I pushed this up as well.—————-
One of the few 24-hour stores in downtown Chicago is gone.  Not just closed — but actually GONE. 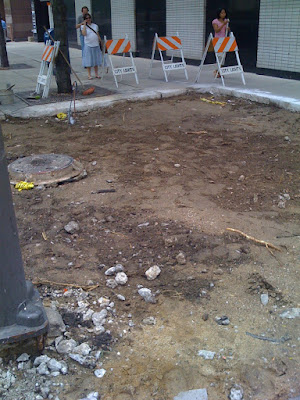 This past Wednesday (July 15th), city crews dismantled the newspaper kiosk on the corner of Michigan and Chicago Avenues next to the Walgreen’s, dug up the foundation and poured a blanket of fresh new concrete.  The only evidence that there ever was a newsstand at this location is a paper sign taped to a nearby pole promising that the newsstand will return by July 20th. 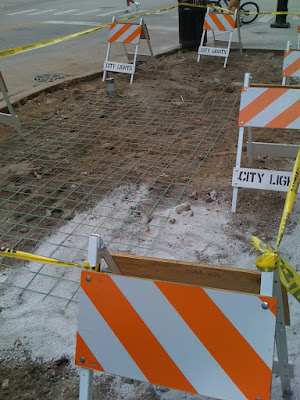 The same thing (pictured above) happened a day earlier to the newsstand at the corner of State and Division Streets, in front of the Washington Mutual.

Neither newsstand was very pretty, but they were at least reliable.  The main one on Chicago Avenue was open 365 days a year, and I’ve personally purchase copies of British Vogue there at 3am.  For a city the size of Chicago, 24-hour shopping and dining opportunities are remarkably rare.

Similar newsstands on Randolph Street and other places in The Loop have been replaced by new French street furniture by JCDecaux in recent years.  The new newsstands are expected to be the same style, as will the news kiosk on Chicago and State when it returns after the construction of Loyola University’s latest building.