Chicago Brick of the Day: Another Palace of Westminster artifact 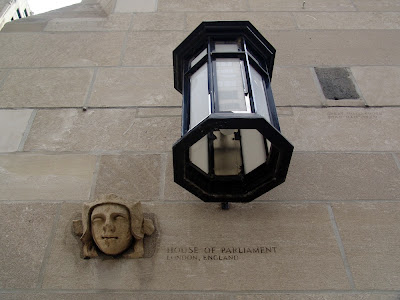 In an effort to showcase the magnificent architecture of Chicago’s Tribune Tower, and to help people understand just how powerful and influential the Chicago Tribune newspaper once was, the Chicago Architecture Blog presents: Chicago Brick of the Day.
Today’s brick is from:
The Palace of Westminster .  Like another artifact from the same building, this is mislabeled.   “House of Parliament” is wrong. “Houses of Parliament” is closer, but “Palace of Westminster” is most accurate.  And to be really precise, you can debate over whether it should be labeled London or Westminster.
Each day we’ll show a photograph of a rock, brick, or other piece of stonework embedded in the exterior of the Tribune Tower .
If you haven’t done it yet, play tourist for a couple of hours and wander around the outside of 435 North Michigan Avenue and marvel at an architectural work that will not be equalled in our lifetimes.