Last week we noted the disappearance of two of the city’s higher-profile newsstands.  The kiosk on the corner of Chicago and Michigan Avenues and the one at the corner of State and Division Streets in front of the Washington Mutual at 1200 North State Parkway both disappeared last week to be replaced with fresh pads of gleaming concrete.

A note tacked to a light pole on Chicago Avenue noted that the kiosk would return, and indeed, it has. 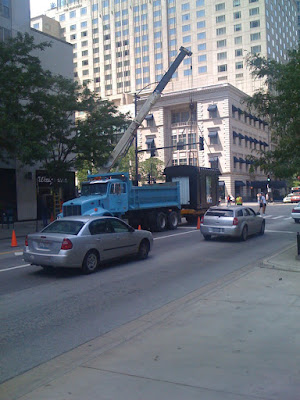 Monday, a City Lights truck and crane showed up with a brand new newsstand from JCDecaux.  The new kiosk is the same as the other new ones already in place in The Loop and matches the rest of the motif the city uses for its street furniture, harkening back to Chicago heydays of the 1930’s. 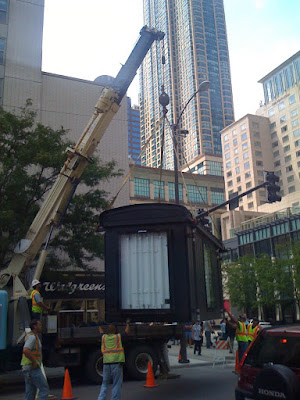 The crane had some trouble getting it in place because of a stray electrical line and the face that the kiosk goes under a tree.  But after a little while, the crews managed to figure it out. 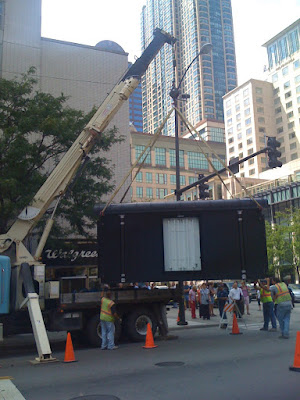 In what feels like a bit of irony, the newsstand is getting new life just as the Borders store across the street at 830 North Michigan Avenue gets ready to close for good.  Regulars have told us that there are a number of subtle signs that preparations are already underway for the shuttering of the readery.  Chief among them, is the removal of several formerly prominent shelving units, leaving gaps in what would otherwise be prime retailing space. 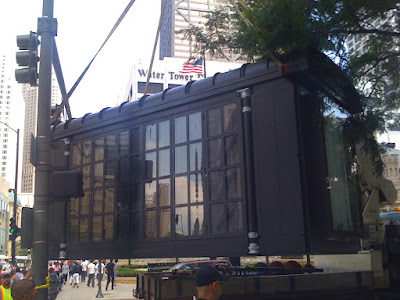