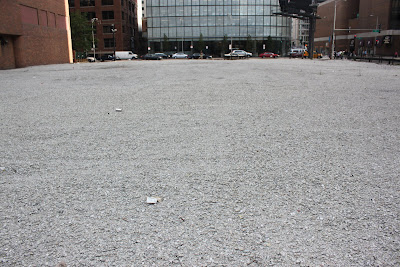 It was with minor hoopla last year that a surface parking lot and a beloved neighborhood hot dog stand were razed to make way for a residential condominium project at 560 North Fairbanks.  Since then, some dirt was trucked away, some bright yellow machinery moved some dirt around, and then it was covered with stones and apparently forgotten.

The stones remained silent for so long that the chain link fence was taken down and a nicer fence erected.

Then, the day after we took this picture, bulldozers showed up and started moving dirt again.  What does this mean?  We’re not sure.  If we were optimists we’d say it means there’s hope once again for the 58-story, 787-foot-tall building.  But we’re not.