Chicago’s Other Riverwalk (with video)

Mayor Daley has been bursting with pride lately as his long-desired Chicago Riverwalk finally takes off.

What was just a patchwork of concrete and pioneering restaurant kiosks for the last couple of years have finally developed into a cohesive system of walkways, eateries, pocket parks, bicycle rental places, and even a pair of minor museums.

Tourists and Loop workers both seem to be embracing the new outdoor venues along the main branch of the Chicago River.  But while the area is labeled “Chicago Riverwalk,” it isn’t the only riverwalk in Chicago. 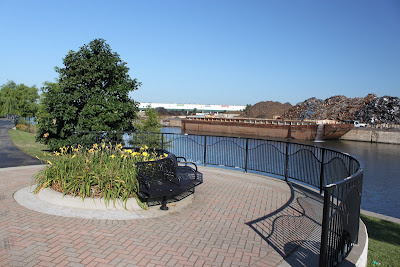 There is a much earlier riverwalk that most Chicagoans never see.  Instead of being on the Main Branch of the Chicago River, this one is on the South Branch, off of Ashland Avenue around 31st Street.  It’s called the Canalport Riverwalk, and came to live in the mid-1990’s.

Officially, there is no neighborhood designation for this area.  It could most closely be called McKinley Park.  But on city maps it’s literally a big gray area.

In 1995, the city of Chicago bought an old Sears warehouse and tore it down.  It then cleaned up 60 acres of land, fixed the bulkhead against a dead-end canal, and sold off pieces to businesses that promised to bring in jobs.

The most prominent business landed here was the Sun-Times News Group.  It paid the city $12 million for the land, and opened a $100 million printing and distribution plant on 29 acres at 2800 South Ashland Avenue for the Sun-Times and some of its suburban newspapers.  In return, the city gave the Sun-Times a few million dollars to offset land preparation costs, and helped it get a tax reduction from Cook County. 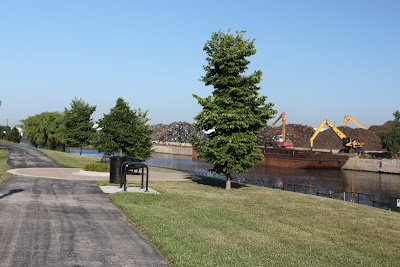 Today, the Canalport Riverwalk angles around two sides of the printing plant.  It has a nice path with plenty of seating, a few trees, devices for holding fishing rods, and several swaths planted with native grasses and plants.

Birds have discovered the place, and on our visit we saw a flock of goldfinches and many other brightly colored visitors.  There’s some evidence of aquatic life, as well, though we couldn’t tell if it was fish or amphibian. 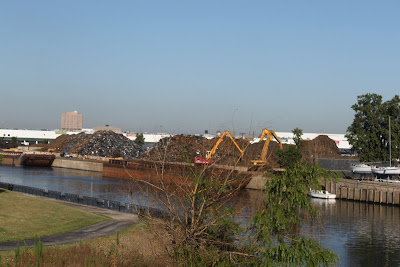 It’s hardly a quiet oasis, though.  The noise from the metal sorting and barging facility across the water is substantial, and trucks visiting both the printing plant and nearby distribution centers add to the cacophony.  If you’re the sort of person who says, “I love work.  I can watch it all day,” then this is the place for you.  Siting on a bench watching heavy machinery unload, sort, and load scrap metal is fascinating to some.  It’s like watching a life-sized episode of Dirty Jobs in the best HD money can buy.

Very few humans have found this place.  In three hours spent there, only one other person appeared, and he was an angler.  But it’s a good example of turning what once was a strip of wasted industrial property into something nice, even though most people don’t even know it exists.

Here’s a view of what you’ll see (and hear) if you go: