The City of Chicago is considering a plan to open three new hotels in River North.

The project, known collectively as the “Clark and Grand Hotels” has been designed by HOK Architects, and would be located on the western third of the block bounded by Clark Street, Grand Avenue, Dearborn Street, and Illinois Street. 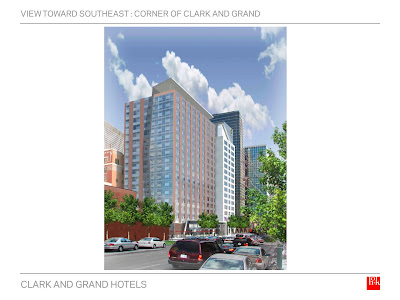 One would be a 181-room Fairfield Inn and Suites at 56 West Illinois Street.  Currently, this location is a surface parking lot. The new building would be 16 stories, and 159 feet tall.  The architect’s drawings label it 17 stories, but they’re skipping 13.

Second is an 18-story, 168-room Hyatt Place on the corner of Clark and Illinois.  It currently has the puzzling address of 520 North Dearborn Street, but the front door of the new building would be moved to Illinois Street.  The height to the roof is about at 155 feet, 173.5 feet to the top of the mechanical penthouse, and 182.5 feet to the maximum height of the structure.  Right now it’s an old bank building from 1947.

Third is also 18 stories.  It is expected to be a 272-room Aloft hotel, at approximately 511 North Clark Street.  Right now this is surface parking.  In addition to the hotel, space has been left in the building for some ground-floor retail facing Grand Avenue.  Its main distinction from the other buildings is the inclusion of a decorative cornice which shades the roof and extends down the Grand Avenue side of the building.  Roof height of this building is pegged at 171 feet, while the cornice gives it an overall height of 187 feet. 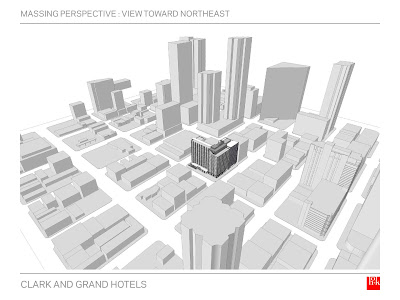 The project isn’t too much taller than Boyce Building, with which it will share the block.  But it’s somewhat larger and taller than its neighboring buildings.  However, a number of those buildings are older and municipal in nature (fire station, post office, etc…) so they are out of scale with the rest of this mid-rise zone. 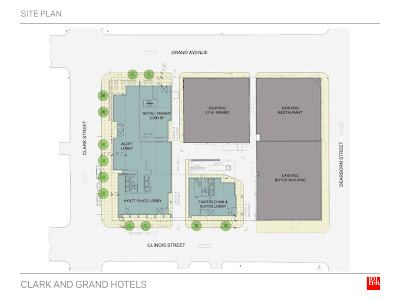 In addition to the Boyce Building, the other buildings that remain on the block are the shuttered Blue Water Grill, and a mixed use building at 57 West Grand that is home to a restaurant and a jazz bar. 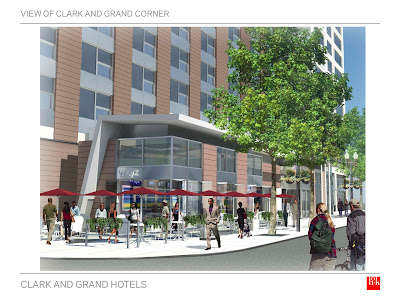