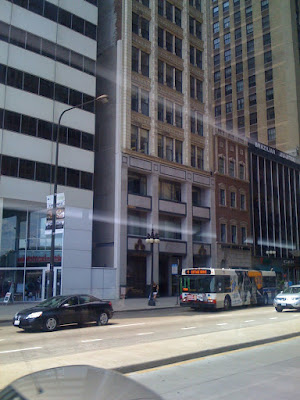 A couple of months ago we told you about how the Greek national bank in the Atlantic National Bank building closed up shop.  For a while the front of the building was plastered with a billboard for a formerly trendy brand of vodka.
Now the ad is down, and the lobby is visible.  But what isn’t visible is the “Atlantic Bank” sign that once marked the front of 168 North Michigan Avenue.  The 1912 building is officially the “Atlantic Bank Building,” but with the sign down and its namesake tenant apparently gone, it’s going to need a new name.
Interestingly, the building right next door at 150 North Michigan Avenue also needs a new name.  Right now it’s loved by millions as the Smurfit-Stone Building, but according to Crain’s, Smurfit is on the way out, too.