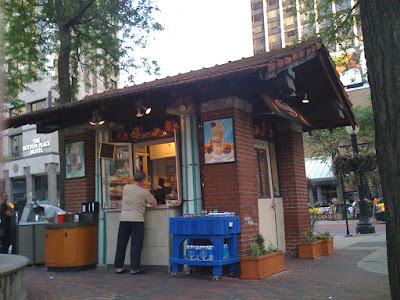 The nearest building to downtown Chicago that Frank Lloyd Wright had a hand in is the Charnley House, at 1365 North Astor Street in the Gold Coast.  But a little closer is an often-overlooked Wrightian building that many people assume is new, not old.

The Mariano Park Pavilion at 1031 North State Street is the fulcrum of the area known as Viagra Triangle, at the intersection of North State Street and North Rush Street.  These days the pavilion houses a Whispers cafe, and is a regular stop for many people who live in the area and for the occasional tourist that ventures into the neighborhood.

Although it looks like a reproduction of Prairie School architecture, it’s actually the real thing.  It was built in 1895 and designed by Birch Burdette Long.  He was on Frank Lloyd Wright’s staff before going out on his own.

The pavilion was renovated in 1979 and contains many easily-overlooked details.  Pay particular attention to the glazed columns flanking the service window, and the details under the roof gables.

Most people just think of it as a place for a quick cup of coffee, but it only takes a few minutes of quiet inspection to develop a different appreciation for this gem hidden right under our noses.