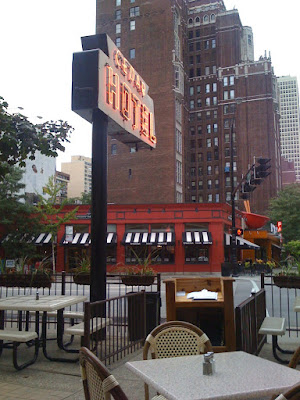 After what seemed like an eternity of sitting empty and abandoned, the Gold Coast’s Cedar Hotel (1118 North State Street) is open once again.

Not too long ago there were grand plans for the Cedar, but then economic realities caught up with the owner, and one thing failed to lead to another.

Now the place is open once again as a restaurant, and not a bad one, either.  I had the best ruben I’ve ever had in Chicago here.  It’s a dry, barely-krauted sammitch that’s billed as Chicago style.  My wife had nothing but good things to say about her fried chicken sandwich.  And this is the first place we’ve found in Chicago that offers cheese curds as an appetizer.  We ordered them, but it turned out that the kitchen was curdless so we did without an appetizer. 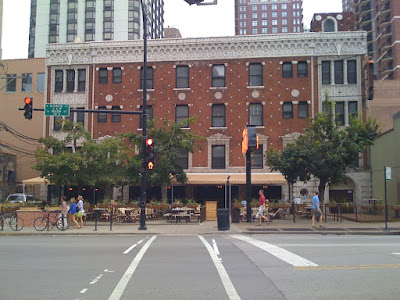 The Cedar Hotel used to be a hangout for some of the worst sort of people who gravitated to the Viagra Triangle area trying to prove that age hadn’t affected their manliness.  The Cedar Hotel management has stated in the past that it’s interested in being a neighborhood joint, not a haven for cruisers.  They might go a long way toward discouraging the misogynistic douchebag crowd from returning if the waitresses were dressed a little less like Hooters girls, and didn’t have “Vacancy” stamped on their uniform shirts just above their butts.  Some of us don’t require the services of the neighborhood’s eponymous pharmaceutical, so having a dozen muffin tops bouncing around while we lunch is unnecessarily sleazy.