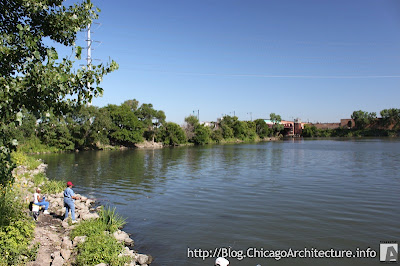 A pair of anglers cast their lines into what was once Chicago’s infamous Bubbly Creek.  The waterway is much improved since the days when chickens would walk across mats of rotting animal guts and it would occasionally catch fire.  The city actually encourages fishing here, and nearby at Canal Origins Park at 2701 South Ashland Avenue are ranks of fishing pole holders installed by the Park Department.

The indentation in the riverbank on the left is the location where the Illinois and Michigan Canal once joined the South Branch of the Chicago River.  It is now an industrial park.