Up Close With the Apple Store’s Green Roof

Apple has long touted the environmental friendliness of its computers.  What a lot of people don’t realize is that the company goes to great lengths to make its hundreds of retail outlets environmentally friendly as well. 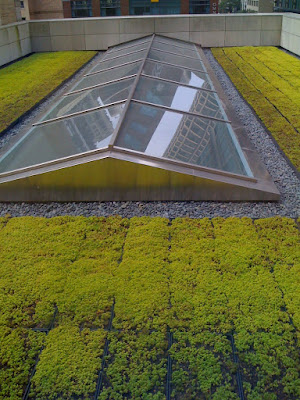 The Chicago Apple Store is a good example.  If you’ve ever looked out the window from the food court at Chicago Place, or looked up the address of the Apple Store (679 North Michigan Avenue) on Apple’s web site, you’ve probably seen the building’s green roof. 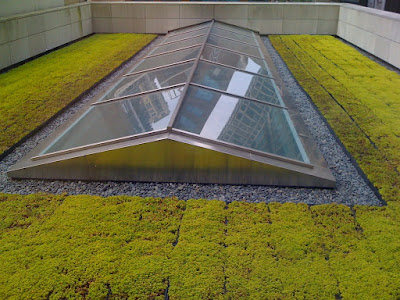 Finally, we got the opportunity to get up-close and personal with the sprouts we’d seen from a distance since 2003.

Like many green roofs, this one by Hoerr Schaudt Landscape Architects is based on a system of trays arranged in a grid around the store’s central light well.  Specifically, it’s the GreenGrid system.  Each of the 302 trays are four inches deep and together cover about 2,400 square feet of the roof.  They are planted with Sedum Kamtschaticum, also known as Orange Stonecrop.  We probably don’t have to tell you that it’s drought and cold-resistant. 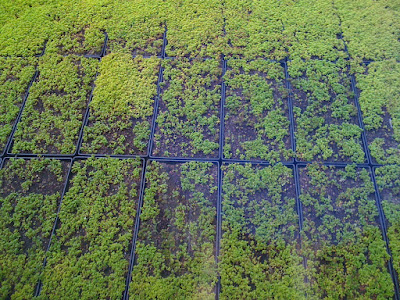 The building wasn’t initially designed with the green roof in mind.  Hoerr Schaudt was working on the parkway landscaping in front and on the side of the building when the firm approached Apple about also installing a green roof.  Apple agreed, and the rest is vegetative history. 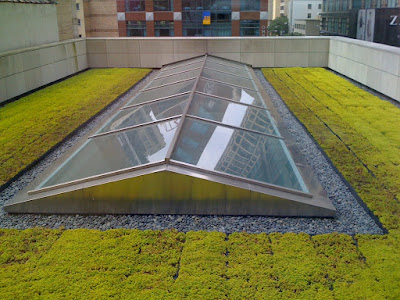 The roof has several benefits: