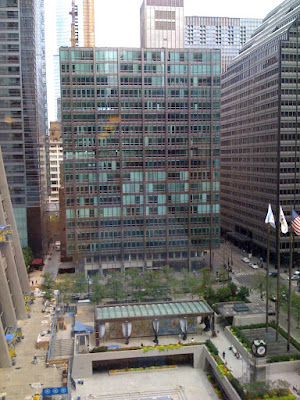 What kind of building would an architect buy, if he could buy any building?  The answer is 30 West Monroe Street, the former Inland Steel Building.  The building has been a favorite of architects since its construction because of its many leading-edge design features.

Bruce Graham and Walter Netsch of Skidmore, Owings & Merrill put the structural supports on the building’s exterior and the elevator and services in a separate tower behind the building, giving the tenants oodles of column-free workspace, while still allowing massive amounts of natural light to penetrate to the building’s core.

The building is so beloved by architects that starchitects Frank Gehry and David Childs bought the building in 2007 for $57 million.  And when it came time for Richard Keating to design 1 South Dearborn next door, he told me he was extra careful to be both deferential to and harmonious with 30 West Monroe.