Things Getting Harry on Navy Pier

We were disappointed when Joe’s Be-Bop Cafe closed at Navy Pier before the season even began.  Workers at nearby restaurants told us it was going to be replaced by a BW3 (Buffalo Wild Wings and Weck) franchise.  But that failed to materialize.

Now, with Summer 2009 but a memory, there may actually be a restaurant finally about to fill the Be-Bop space.  It’s a branch of River North mainstay Harry Caray’s restaurant.  Signs at the pier proclaim that it’s under construction, and as far as our untrained eyes can tell it could be opened soon since we saw what appeared to be wait staff inside getting ready for something. 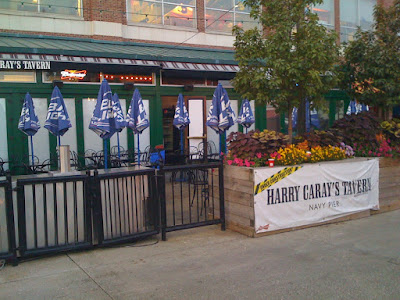 It will be nice to have this in the neighborhood.  We used to go to Harry Caray’s on Kedzie once a month for about four years until there was a very disturbing incident in the women’s restroom, and when it was brought to the management’s attention we were blown off.

But we’re not much on grudges, so we’ll check out the Navy Pier eatery once it opens, and hope that the food is of the same quality as the mothership.