The newest attraction at Navy Pier is strangely familiar to us. 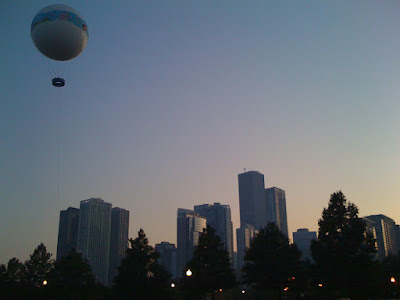 The first time we encountered a tethered helium balloon as an amusement attraction was in Singapore a few years ago.  According to Wikipedia, the old DHL Balloon that made us fudge our Huggies is no longer there.  For those of you who didn’t get a chance to ride it, the beast shot silently up 59 stories on a single steel cable, carrying beneath is a doughnut-shaped gondola full of tourists.  Because it was attached to the ground with just the one cable, it had the ability to sway and meander with the wind, bringing passengers perilously close to nearby skyscrapers.  To complicate matters, all of the passengers rushed to the northwest side of the gondola to snap pictures of the downtown skyline, which made the entire affair lurch, lean, and list menacingly to one side.  It is a singular experience in terror. 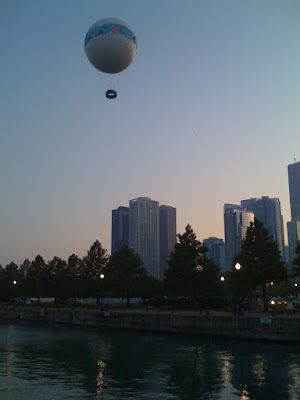 The Navy Pier version is somewhat tamer.  It’s half the size and carries people a mere 35 stories high, but appears to suffer from the same lurching, drifting, and leaning behavior of its big sister on the other side of the planet.

Whether you go up in the balloon is up to you.  It’s probably one of the best locations from which to get pictures of the city.  But the faint of heart (or weak of wallet — it costs $25 bucks!) may want to think twice before taking the silent ride.