Sony learned its lesson.  So did IBM.  But Zipcars… not so much. 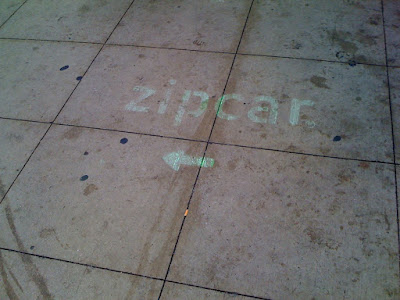 The vehicle sharing service which promotes itself as an environmentally friendly alternative to owning a car appears to be guilty of visual pollution.

A number of big companies have done similar things — putting graffiti on city sidewalks in order to push their products.  IBM did it with Linux.  Sony did it with the PSP.  In both cases, the companies were fined for their transgressions.

In this case, Zipcar has put chalk graffiti on the streets of Chicago’s Loop pointing to the location at 160 North Wabash Street.  Whether anyone follows the arrow is a moot point.  That’s not why companies post ads like these.  They’re looking for branding, and if someone happens to use it as a visual aid then that’s just a bonus.

Zipcar promotes itself on its web site as, “Zipcars are good for the planet.”  I guess the company also believes the planet would look better with a few extra tattoos.