What is Hubbard’s Cave?

Every day millions of people driving around Chicagoland listen to the local traffic reports on TV or the radio.  Hundreds of times a day, traffic reporters reference a place in Chicago called “Hubbard’s Cave.”  Travel times in and out of the Loop are calculated based on the location of this landmark.  But remarkably few people really know what it is, or what it looks like. 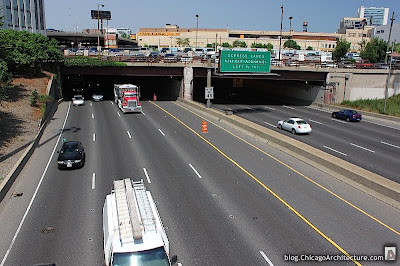 Many people are correct when they state that Hubbard’s Cave is the place where interstates 90 and 94 go under Hubbard Street in West Town.  But there’s a lot more to Hubbard’s Cave than a simple overpass.

Hubbard’s cave runs for a quarter of a mile from West Hubbard Street to West Wayman Street.  Unless you’re stuck in traffic, in a car it flashes by in the blink of an eye since there are so many other things to keep your eyes on at that critical salmon run in the highway.  But up top, there’s quite a lot to see. 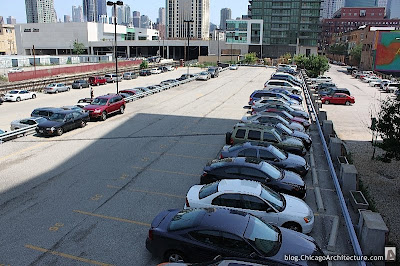 (There’s no sign of it at the surface, but traffic is humming through Hubbard’s Cave beneath this parking lot.)

More than just a street underpass, Hubbard’s Cave is a triple-decker infrastructure sandwich that passes beneath railroad tracks, parking lots, even entire warehouses are perched over this most vital of Chicago’s motor arteries.  Now and then there are gaps in the roof allowing people to peek down into traffic.  Or more often — allowing the traffic below brief glimpses into shafts of sunlight from above.

The earliest reference to “Hubbard’s Cave” we could find in local newspapers was from 1962, and it’s clear from the context that the name was already in common use by the public.  Back then what we now call the Kennedy Expressway was known as the Northwest Expressway and people traveling the route were in much more peril than today’s travelers. 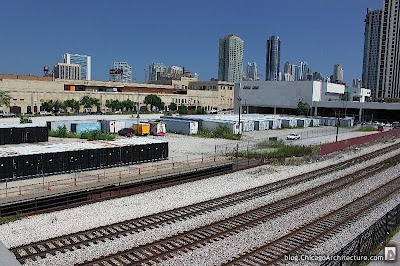 That’s because of the “cave,” itself.  It earned its name because its size made it unusually dark for an underpass segment of a freeway.  So drivers entering the underpass needed a few seconds for their eyes to get used to the darkness.  Then, less than a minute later, they’d be blinded by the sun as they emerged from the other end.

The name, obviously, comes from Hubbard Street above.  But there is some evidence to show that it may be WGN Radio’s Irv Hayden who coined the term and made it famous.  He was 720’s helicopter traffic reporter, best known for occasionally landing next to freeways and helping stranded motorists push their cards to the shoulder.  It was his use of the term that spurred city officials to do something about the “cave”-like nature of the road. 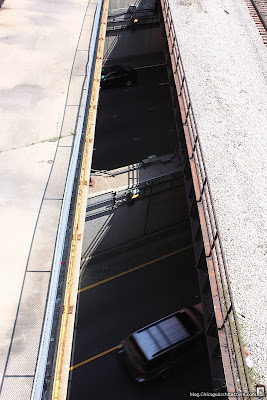 (A glimpse of the traffic through a gap in the roof.)

It’s remarkable by modern standards to realize that this underpass, and perhaps many more like it, were unlit.  There were no lights underneath the bridges and viaducts that make up the cave.  It was originally thought that car headlights would be enough to successfully navigate the passage.

That changed in 1962 when the city of Chicago spent $160,000 to fix the day-night-day problem for drivers.  According to a letter to the editor in the August 26, 1964 edition of the Chicago Tribune, the city spent $20,000 covering the walls with high-gloss paint to reflect light, and another $140,000 on lights so that drivers’ eyes wouldn’t have to make such painful adjustments from light to dark and back to light again. 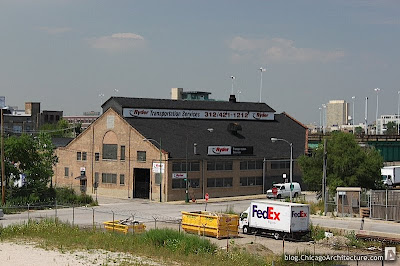 (Construction of what would become Hubbard’s Cave clipped off the northeast corner of this warehouse.)

Edward Reiter, the man who spearheaded this project when he was chief engineer of the City of Chicago’s Division of Subways and Superhighways (what a great department name!), lobbied to have the name of the underpass changed to “Reiter’s Daylight Passage” since it was he who turned the “cave” into something else.  But, as we all know, nearly 50 years later the name remains the same. 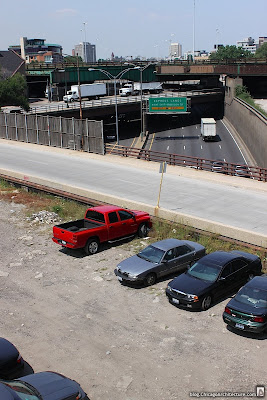 (The other end of Hubbard’s Cave.  Nature tries to reclaim the parking lot, but the plants don’t realize they’re not on terra firma.)