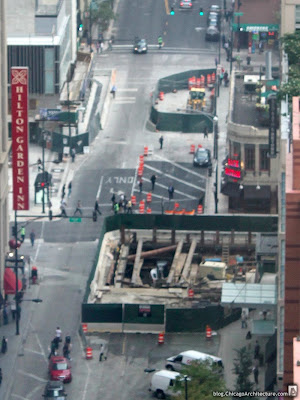 If you’re one of the thousands of people who have been detoured off State Street in the last few months, here you can see why — there’s a massive gaping hole in the street.  It’s the nearly total rebuilding of the CTA’s Red Line station at Grand Avenue (521 North State Street).  You’re spending $67 million on the project, which is the station’s first renovation in 66 years.  I couldn’t find an anticipated completion date on the CTA’s main web site, and the special site for journalists appears to have disappeared since the new main site went online.  If anyone knows the date, post it in the comments section below.