A Closer Look at the CTA Light Show

Once or twice in the past I’ve blogged about the CTA’s elevated station at State Street in the Loop.  The reason was because last winter I noticed some kind of light show on the stationhouse.  At first I thought I was imagining things, but eventually I got the chance to see it up close and personal.  It is real. It consists of semi-opaque panels just above the El superstructure.  Behind the panels appears to be arrays of colored LEDs.  The panels change colors quickly enough to be noticed, but not so quickly as to be distracting. 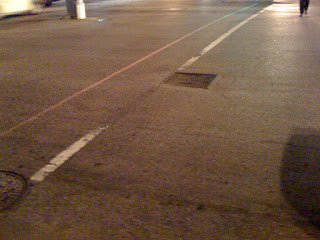 The light is powerful enough to actually cast a stripe across the width of State Street, as seen in this CrappyCameraPhone™ photo.

I still haven’t been able to track down any information about it other than the CTA is required to set aside a certain percentage of any money spent on renovating stations for use in public art.  I’m OK with that, especially if this is the result.