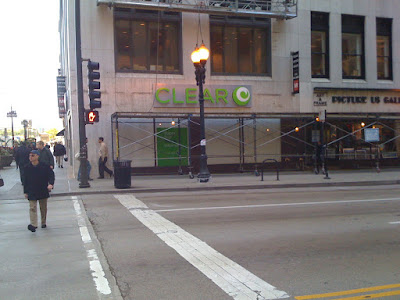 The vacant storefront on Michigan Avenue at Lake Street is going to be a little less vacant.  When National Community Bank moved out earlier this year, it created an opportunity for ad agencies to use the facade as a billboard.  That has come to an end now that Clearwire is kitting out its new Loop store.

Clearwire (apparently branded as simple “Clear” in Chicago) is a company that provides internet service via WiMax.  If you’ve seen the commercials for Sprint touting it being the first company with 4G, that’s what this is all about.