There are some cities in the world where you don’t need a watch.  Wherever you are there are buildings and posts, and towers, and signs adorned with a variety of clocks.

Chicago isn’t one of those cities.

The kind of clocks we tend to get around here tend to be either few and historic or afterthoughts in Disney-inspired family-friendly fake town squares.  But not everyone has put Father Time out to pasture. 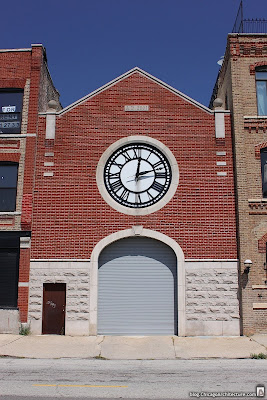 This garage at 660 West Hubbard Street could have been a boring expanse of brick. Instead, a massive clock traps the eye, distracting you from even noticing that this is an industrial building.  And check out the date stone toward the top.  The building was put up in 2001.  For a garage in a marginal area on a back street where no one will ever see it, a lot of thought was put into this.  We really appreciate the effort.