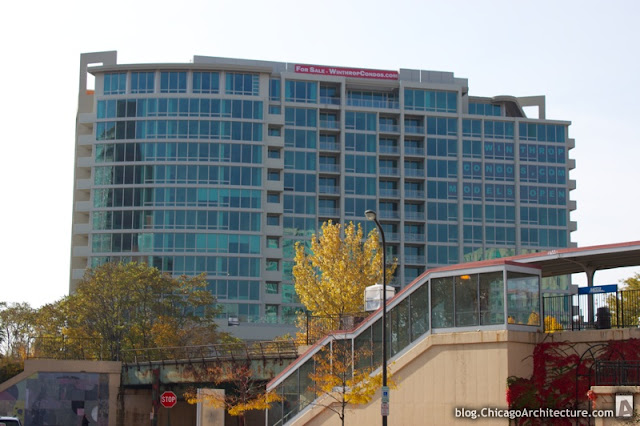 Evanston has a new condo block opening soon.  The Winthrop Club (1570 Elmwood Avenue, Evanston) is a project of Winthop Properties, which is located in the north suburb.  It’s the latest in a series of modern-looking mid-scale skyscrapers that are transforming the look of this ring city. 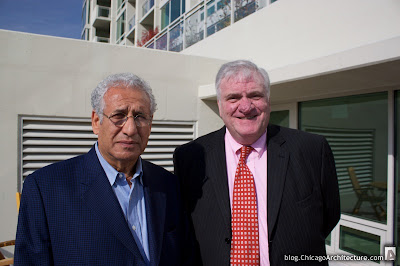 At a media preview held last week I was given the chance to tour the not-quite finished building, and it’s a nice place.  It lacks much of that “new skyscraper smell” we all love, but that’s because of the use of low-VOC materials wherever possible.  As much as I enjoy the scent of fresh paint and carpeting, at some point I have to admit the odor is killing me. 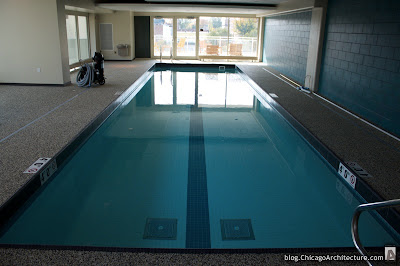 Our tour started on the fifth floor, where parking levels give way to a common area.  There is a club room with a kitchen that residents can use for parties.  Unlike most buildings, there is no fee for this.  The party room opens onto an outdoor patio with room for about 50 of your closest friends.  It wraps around the southeast corner of the building and has access to the pool.  The pool is indoor, and heated, but is unfortunately better described as a “lap” pool with room for two lanes of very careful swimmers, or about a dozen people lounging around.  While not the tragically lilliputian puddle that somehow qualifies as an amenity at The Shoreham (400 East South Water Street, Chicago), it would have been nice to see a larger facility.

A nearly identically-sized space is given over to the indoor gym, which was unfurnished on our visit, but is expected to sport the usual assortment of treadmills, weight devices, and other fitness contraptions that mostly gather dust at many residential buildings.  For a building with just 92 homes, there should be plenty of machines available when the urge strikes. 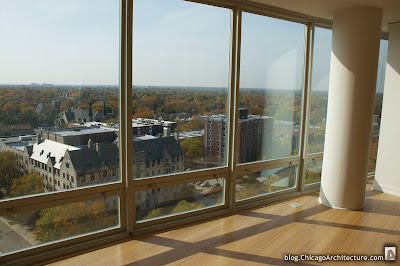 Our next stop was on the 14th of 15 floors where we toured a very spacious, and incredibly well-lit four bedroom unit featuring west, southwest, and northwestern views.  It’s an amazing space with a great open kitchen, respectfully separated from the the living area by a more than generous island.  It also comes with a price tag of $1,400,000.  Whether $1.4 million is reasonable in Evanston, Illinois is an exercise left up to the reader.  Especially since at the time of this writing, one can get a similarly sized unit with better mass transit access, neighborhood, and building amenities near the top of Chicago’s John Hancock Center, or even in a Western-style building in Tokyo for that price.  However, people we talked to about it insist there is a market for that price point in that location.  I’m not a real estate expert, so I’ll defer to their assessment.

Speaking of assessments, the monthly fee is about 40 cents per square foot, with some exceptions for taller units.  Included in that fee is an electric car fueling facility in the garage.  So if you own an electric car and live in the Winthrop Club, you would essentially have unlimited free fuel since the plug-ins are complementary.  Also in the garage, and also on an environmental theme, are 200 bicycle parking spaces.  Yes, 200 bicycle parking spaces for a building with just 92 homes.  At first I was skeptical, but after seeing the state of bicycle parking and use around Evanston, this makes a lot of sense.  People there seem to use bicycles a lot more than I’m used to seeing in downtown Chicago. 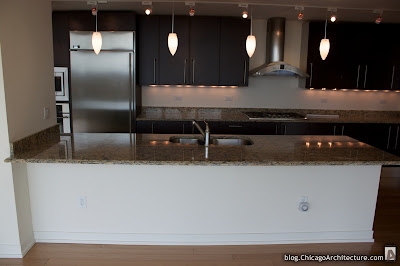 In terms of finishes, the units are well done, but not exceptional.  There is extensive use of sustainable bamboo as part of the building’s environmental program, and the hallways seem understated and classy.  Inside the units — stainless steel appliances?  Check.  Granite countertops?  Check.  White vinyl-coated wire shelves in the closets?  Oh, dear.

Only one of the three condominiums that we toured was decked out as a demo unit, and it had those awful white wire closet systems that you can pick up in any Ace Hardware store for a few bucks.  For the price of these homes, I would have expected custom closets with cedar shelves.  The kitchen cabinets are imported from Italy, but it’s important to note that even Rome has two Ikeas.  The cupboard doors are thin and the interiors have those rows of peg holes which give away the fact that these aren’t custom-made, but mass produced parts designed to fit any home, not just yours.  I’m not harshing on Ikea-style cabinets.  The ones in my home are Ikea.  But then my home is 40 years old and cost an order of magnitude less than the one on the 14th floor of the Winthrop Club.

Still, it’s important to remember these are condos, not apartments.  The interiors are as classy as you choose to make them.  If you can splash out $600,000 on an 1,100 square-foot space then it’s not unreasonable to expect you to splash out a little more to make sure your space is appropriately kitted out.

As they say, the most important thing in real estate is location, location, location.  And that’s something the Winthrop club has in spades.  It’s right next to the Davis CTA and Metra stops and within a couple of blocks of a number of CTA stops, Pace routes, shops, restaurants, bookstores, even a movie theater.  Starbucks is a few blocks away, but there’s an Argo Tea right around the corner.  And in spite of its proximity to the train lines, when the El and Metra trains went by we didn’t hear them inside the units.  Several noise-reduction measures have been taken in the construction of this building, including having the joists in the walls offset so that they don’t transmit noise between levels. 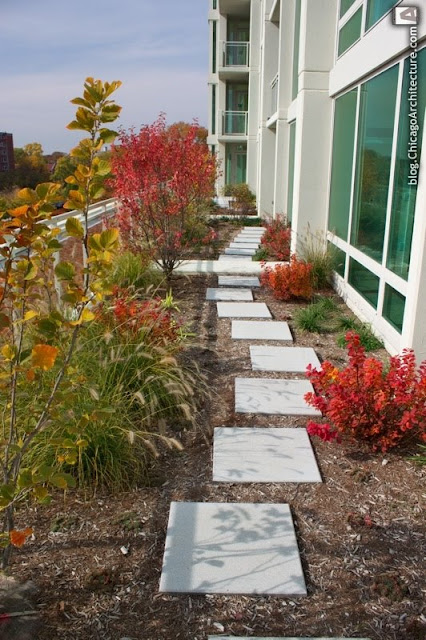 But the piece de résistance of this building is the condo we saw on the sixth floor.  It’s a south-facing unit that is laterally oriented.  It’s an unusual layout, but ends up with some great features.  Among them, a second entrance from the hallway with a tile floor to keep your muddy young ones from mucking up the nice carpet.  And outside is a landscaped terrace that runs nearly the length of the building.  Each bedroom has its own door opening onto the terrace, and one of the bathrooms has floor-to-ceiling glass which absolutely floods it with light, and gives you a commanding view of your domain while sitting on the throne.  Can people see inside while you’re taking a shower?  Only if they put a 60-foot-tall hydraulic lift in the parking lot next door.  And that parking lot is expected to remain a parking lot for the foreseeable future.  The bank that owns the adjacent property isn’t going to build upward, and even owns a dozen parking spaces inside the Winthrop Club’s garage.  The developers believe this is perhaps the last plot in downtown Evanston available for high-rise development, and expect views from this building to be preserved for the foreseeable future.

All in all, the Winthrop Club is a worthy addition to the Evanston condo scene.  Its fit and finish is far better than what I’ve seen in the other condominium blocks.  The ceilings are taller, the materials better, and it’s designed for the environment, if that sort of thing is important to you.  Whether you plan to stay in town, or commute down to Chicago, you couldn’t ask for a better location, and the views of the surrounding area are fantastic.

Over the next couple of days we’ll post a few videos we shot of the property.  I especially recommend watching the first one and hearing the developer describe his struggles against Evanston’s city council to get this tower built.

You can also view lots more pictures of the building’s interior and views on the Chicago Architecture Flickr pool. 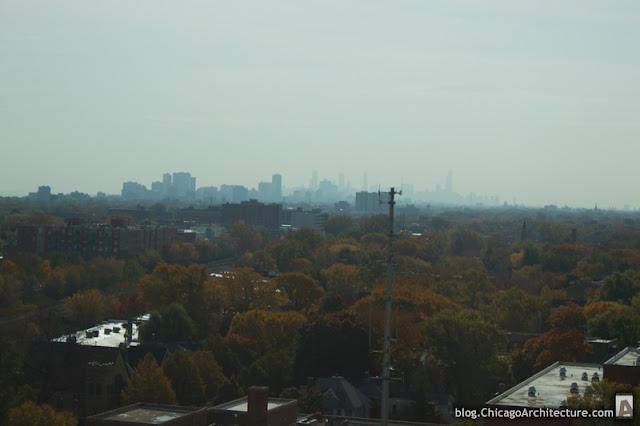 View of the Chicago skyline from the Winthrop Club