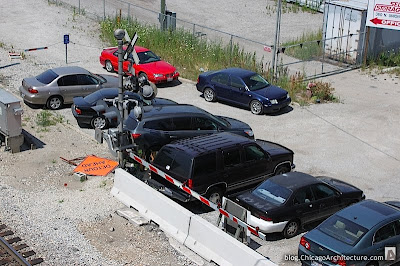 We’ve all seen it on the news — Random Driver decides to go around the striped arm at a railroad crossing and ends up meeting his maker sooner than expected.

That won’t happen at this railroad crossing in West Town.  Not only is there a crossbuck, there are flashing lights, a bell, a crossing arm with reflective stripes and blinking lights, and…  huge concrete Jersey barriers.

Yes, the crossing guard is fully functional.  We snapped this photo as a Metra engine was zipping by unafraid that the SUV might suddenly jump over the concrete wall and challenge its supremacy.

After all, this isn’t Houston.*

(*Inside joke about how SUV drivers in Houston are constantly crashing into its light rail trains because they believe the train will yield to a big enough truck.)