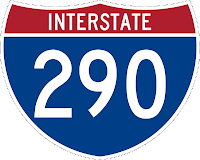 Just a quick note — We hear that there is some preliminary work being done to investigate the possibility of landscaping the Blue Line in the median of the Eisenhower Expressway (I-290).

We don’t know if this will mean simply adding plants in the gravel and dirt areas that the trains aren’t using, or if it means adding some kind of deck over the rail line with a park.