Slice of Life: The Victor Hotel 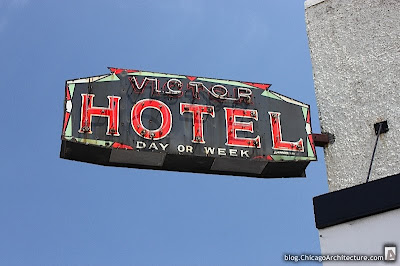 We love old signs.  And the more neon, the better.  And we’re not alone.  This sign for the Victor Hotel (311 North Sangamon Street) in Chicago’s meat packing district doesn’t advertise lodging, but the location of a hipster bar.  At least the sign is being preserved by a new generation.

A search of the Chicago Tribune’s archives didn’t turn up any information on this property.  In fact, the only Victor Hotel that came up was on North Avenue, and was the scene of a murder back in the 1950’s. The last mention of it was in the 1980’s, while tax records show this building was built in 1965.