History Under Your Feet and Over Your Head

Walk down Clark Street in the Loop and if you’re not careful, you might just walk right over this. 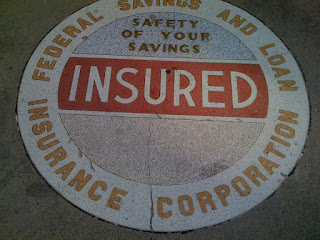 It’s a medallion in the sidewalk  on the west side of the Walgreens (79 West Monroe Street) on the corner of Clark and Monroe.  But oddly, though it takes up most of the width of the sidewalk, it is oriented so that it faces into pretty much the blank side of the building.

That’s because in years past, that wall of display windows was the entrance to the Bell Federal Savings Bank. 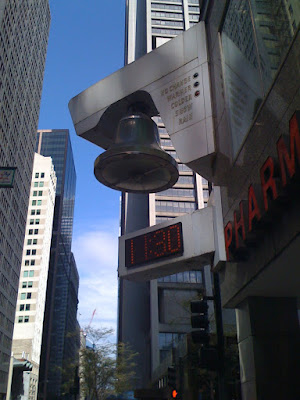 The building was erected in 1903 and still sports a giant bell hanging from the second-floor corner of Clark and Monroe.  The Weather Bell was a gimmick used to promote awareness of the bank, as it changed color to let people know about the weather.  TV and radio stations in rural parts of the country do the same things with their towers.  But in the heart of the city, you need something a little more down to earth.  Thus was invented The Weather Bell.

Of course, Bell Savings is long gone.  It was eaten by Standard Federal Bancorp, which was eaten by ABN Amro, which regurgitated it as part of LaSalle Bank, which has since been eaten by Bank of America.

Remarkably, Bank of America still operates the Weather Bell and it still lets people know if it’s going to rain or get appreciably warmer or colder decades after it was first put into service.