There’s an interesting things that the developers of luxury buildings do in Chicago (and likely elsewhere): They try to out-do each other’s scaffolding. 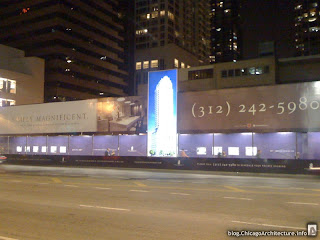 Now that the foundation work appears mostly done at the Ritz-Carlton Residences (664 North Michigan Avenue), there is proper scaffolding over the temporary sidewalk that pedestrians use on the west side of Michigan Avenue.
But the Ritz has trumped the other lux developers by including a two-story illuminated rendering of its building on the outside of the walkway.  The effect is best seen at night, though this CrappyCameraPhone™ picture simply doesn’t do it justice.
This bests the previous best effort, which was at the Elysian Chicago (11 East Walton Street) where the tasteful black scaffolds featured 24-hour piped in classical music.
I can’t wait to see what’s next.
(In the interest of full disclosure it should be noted that I have recently begun blogging for the Ritz-Carlton.  However, I stumbled across the subject of this article before that agreement was reached.)