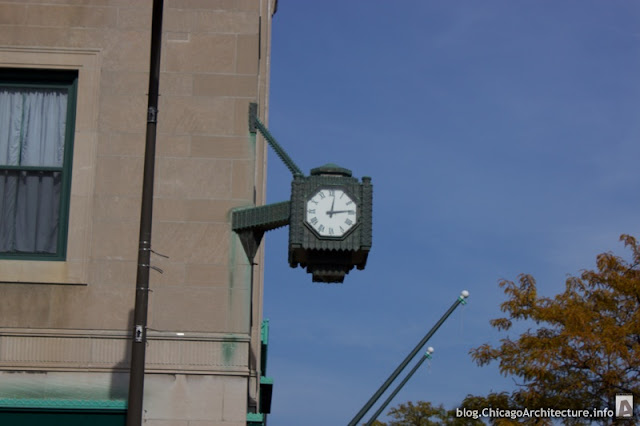 It’s no great secret that even though I travel a lot, I haven’t seen much of Chicago’s suburbs.  Generally, if I’m on the move, my journey starts at the airport.

So on those occasions I venture into the suburbs I’m usually delighted by the little things.  One of them is the series of mini Marshall Fields stores that seem to litter the area.  They help me envision a time when State Street was the great mother ship of a retailing empire, and scattered around its sphere of influence are miniature versions bringing the same class and sophistication to the hinterlands.

Alas, those days are long gone; but the buildings remain.

This photo shows a mini-Marshall Fields in Evanston, now known as the Evanston Galleria (807 Church Street, Evanston), complete with a miniature corner clock similar to the famous one at State and Randolph Streets.

There’s also an even small one in Lake Forest (682 North Bank Lake, Lake Forest) that we’ve mentioned before.  There are probably other ones out there in suburbs I have yet to explore.