We’re learning more about the upcoming reconstruction of North and South Wacker Drive between Randolph Street and Harrison Street.

We first mentioned the rebuilding of Wacker Drive back in November, and now that the April, 2010 start date is fast approaching, it’s time to take a closer look.  I wasn’t in Chicago at the time of the big 2001-2002 rebuilding of East and West Wacker Drives, but people who have been here longer than I say it was an awful time to get around downtown.

Drivers, and especially commuters, should expect much of the same this time around since at the same time North and South Wacker are being reconstructed, CDOT is also renovating Congress Parkway, and IDOT is rehabbing the Congress Parkway Bridge (Eisenhower Expressway/I-290), and repaving the Ike around the Circle Interchange.

But these things must be done.  It’s been 55 years since this portion of Wacker was built.  Time and 60,000 vehicles a day haven’t been kind to it. 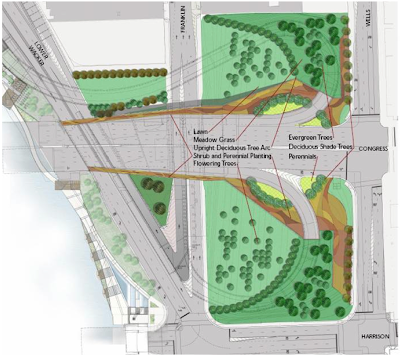 Work begins April 1, and is expected to last until the end of 2012.  For most of the road, construction will be limited to utility work at first.  But April 1, 2010 is also the date of the first big shock of the project — the closure of the Congress Parkway interchange ramps.

The way Congress Parkway connects to Franklin Street changes dramatically.  Coming into the Loop and taking the right exit for northbound Franklin Street will now loop you under D’Angelo Park and land you on the left side of Franklin, instead of the current surface merge into the right side of the street.  Click the map to see the new configuration in detail.

Getting back onto I-290 will only be possible from Congress Parkway, Wells Street, and southbound Lower Wacker Drive.  You will no longer be able to do half a cloverleaf and use Franklin as a turn-around to get out of the city as quickly as you came.

This also means that the tour buses that like to use the city-designated tour bus holding zone (with their engines illegally idling all day) on Franklin will have to find a new place to belch.

CDOT published a helpful guide a couple of weeks ago, and here are the highlights and a useful map we created:

But all of the work won’t be on the surface.  Below ground, Lower North and South Wacker Drives will receive a number of structural improvements, including an increase in the clearance height for trucks by over a foot.
More notably, however, are thick walls and barriers separating lanes of through traffic from local delivery traffic.  It is also possible that some of these barriers are intended to protect the local skyscrapers from subterranean truck bombs, like the nearly four-foot-thick wall planned to run in front of the base of the iconic Willis Tower.
A few other things caught our eyes while inspecting the CDOT documents:  Two references to “Abandoned Garage” beneath 311 South Wacker Drive.  This may not mean there’s an actual abandoned garage beneath the skyscraper, but may just be obsolete entrances to the existing garage.
There was also and a note that the park just south of 300 South Wacker Drive will be walled off from the public on the lower level.  Hopefully there will be some way to get to it from above.