A couple of weeks ago I headed down to Clark Street with a fist full of newspaper coupons, ready to do something gluttonous at Arby’s.  Instead, I found this: 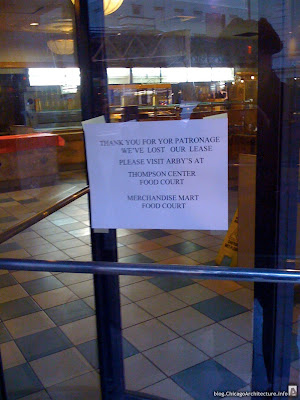 The sign says the Arby’s in the parking garage next to the Chicago Title Tower (161 North Clark Street) is closed.  In fact, the entire mini-food court with the Sbarro and everything is gone.  A note on the door says the proprietors lost their lease.  It must have been a surprise since the Christmas decorations were left behind when this picture was taken on December 23rd.

The sign also notes that there’s another Arby’s across the street at the Thompson Center (100 West Randolph Street).  But somehow I was so disappointed, I ended up at Wendy’s instead.