This is part one of a four-part series of articles about the plans for high speed rail in the Midwest.

Recently a meeting was held to explain the status and possibilities of high speed rail in the Midwest.

I’ve been on high-speed trains from Korea to Japan to Belgium to Italy, and even the Eurostar underneath the Channel Tunnel.  I like rail transport in general, and high speed rail specifically.  But I’ve never had much hope for it in the United States.

That may be because I’ve been exposed to so many doubters and naysayers that I’ve actually started to believe that it’s not possible.  At the meeting in the Loop it was made abundantly clear — High speed rail is coming to the United States.  It’s just a matter of which states will get it.

According to Kevin Brubaker, deputy director of the Environmental Law and Policy Center, $1.3 billion in federal stimulus funds have already been set aside for Amtrak to make upgrades.  Another eight billion dollars is being made available for the states to implement high speed rail.  And the House of Representatives is considering adding another $50 billion in high speed rail funding over the course of five years.

But it’s that eight billion dollar figure that’s the key.  The various states are competing for slices of that pie.  Already $50 billion in proposals have been made by the states, and there are a lot of people who think that the Midwestern states have a good chance of getting some of it. 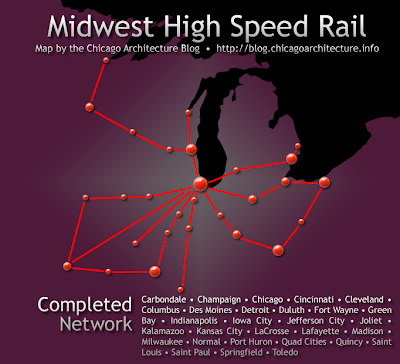 That’s because the governors of the Midwestern states have actually managed to come together and decide how to spend it.  Which cities get rail first, second, and third.  Also on board are various mayors of cities large and small, their chambers of commerce, universities, and whatever other clout the flyover states can muster to turn high speed rail into a reality.

Although there are a number of other networks that will share the funding pool, the main competition comes from cities on the west coast.  Rail service is already pretty frequent there compared to most of the rest of the country, and based on my observations riding it, there is plenty of demand.

In the Midwest, people are still very much tied to their cars.  That makes sense since the distances between most of the cities are too small for efficient door-to-door plane travel, but far enough that regular trains don’t get it done.  But there are signs that is changing.

Just as Chicagoland is dense enough to support both CTA and Metra service between cities, other smaller towns are realizing that they can shrink the gaps between them and the big city by enhancing train service.

For example, in 2006 the state of Illinois coughed up the dough for Amtrak to double its passenger rail service in the state.The result wasn’t merely a doubling of the number of passengers.  It surpassed that.  And today the trains are fuller than before the 2006 funding.

Anyone who’s lived in a small Midwestern town (I did five years in three different small towns) knows that they’ve been struggling for decades.  Adding enhanced rail service between themselves and Chicago is a way to improve their towns and open their local businesses up to new opportunities.  They’d rather be Lake Forest than Oshkosh.  “Bedroom community” is no longer a dirty word.

So, where does it all start?  That question is answered in part two of this series: Who Gets It First?