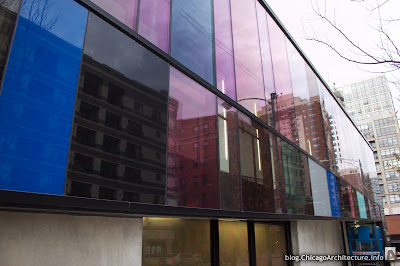 Today was the day that Columbia College debuted its new Media Production Center (1600 South State Street) in the South Loop.  We weren’t there because our repeated requests to be added to Columbia College’s press release distribution list have fallen on deaf ears.  I guess we’re just not good enough for a college that constantly gets confused with a more prestigious institution elsewhere.

Regardless, WBEW blogger Lee Bey was all over it, publishing a piece early this morning with lots of pictures inside and out.  The Chicago Tribune’s Blair Kamen came along later with his story, heavier on meat, but lighter on potatoes.  Kamen uses words like “vibrant” and “inspired” to describe Jeanne Gang’s latest production.  But then again, I’ve never read an article by Mr. Kamen involving Ms. Gang that didn’t involve a certain amount of gushing.  Bey goes with, “a nice piece of work… that doesn’t visually scream across the intersection, yet it will hardly be ignored.”  I’m going to abstain since I haven’t been inside. 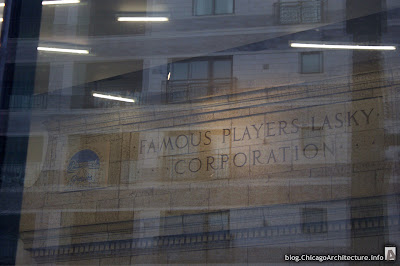 My primary interest in this new building isn’t the new building — it’s the old building trapped inside.  Back when it was still warm in Chicago, I wandered past this construction site and saw the wonderful arch behind glass.  At the time I wondered if it was historic or a recreation, and couldn’t find anything on the internet about “Famous Players Lasky.”  Fortunately, Mr. Bey is a better researcher than I.  According to his write-up, the arch once stood as part of a building on 13th Street and Michigan Avenue, designed by Rapp & Rapp.

It’s a wonderful piece of Chicago history, and if you’re not aware of the city’s historic leading role in the film industry (Chicago was Hollywood before there even was a Hollywood), take some time to do some research.  It’s a shame that Chicago is now a studio backwater, but it’s fascinating to learn about how the film industry was pretty much born here.