Over the last few months we’ve told you how what was once Chicago’s premier shopping street has become quieter and quieter.  Some stores are moving to new quarters, while others are taking advantage of the recession to renovate.

One of our readers e-mailed us photos of an empty store and of a sign taped to the window of Tod’s (121 East Oak Street) showing that it, too, is taking a break to rejuvenate itself.  The paper indicates that the store will reopen next month. 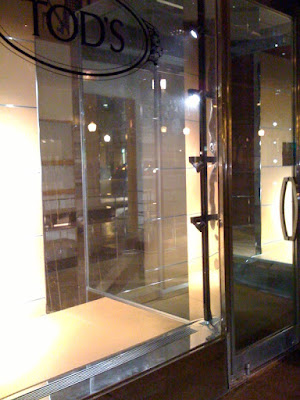 Two weeks ago, the Yves Saint Laurent store (51 East Oak Street) also shut down, and promises to reopen in a few months.  Kate Spade (56 East Oak Street) just reopened over the weekend after undergoing its renovation.  Hermes continues to build out its new store in the old Barneys New York space (25 East Oak Street), and Marilyn Miglin still has signs up indicating that work continues on its space at 112 East Oak Street. 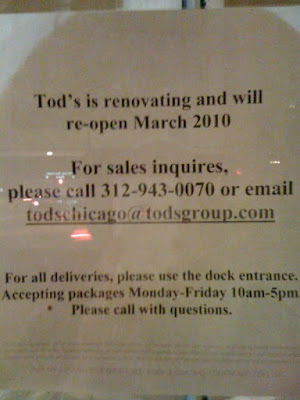 Of course, the ongoing bad news is that there are still a number of vacant spaces on Oak that show no signs of being reborn.  Most prominently 58, 56, and 72 all right by each other.