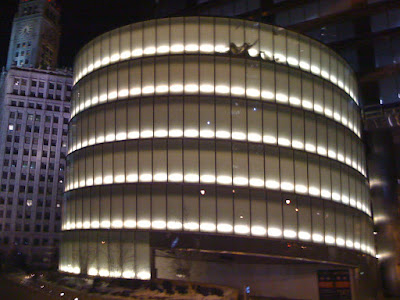 Back in the early days of the internet, back when e-mail addresses were just starting to get “@” symbols in them, I heard something quite remarkable.

I was told that the French don’t have an equivalency for the @ symbol, so instead of calling it “at” they call it “snail.”

I’m reminded of that every time I walk past the Trump International Hotel and Tower (401 North Wabash Street) and gaze upon its adjacent parking garage ramp.  Like a giant electric snail it sidles up to the glass building and threatens to climb up the side.

It’s function is utilitarian, but the vehicular helix is a nice design element.  From afar, you can’t see it — only the building as a whole.  And when you’re near the building, you can’t appreciate it as a whole, but you get to see this element instead.  Something for everyone.