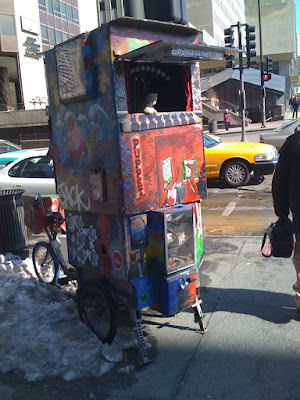 There is no shortage of buskers in Chicago.  From the fully licensed and occasionally talented musicians who fill the subways with song to the illegal bucket-banging kids who scatter when the police approach because they’re really a tool to distract tourists for the pick-pocketers they work with, you can find a wealth of free entertainment options simply by walking the city streets.

Case in point is Jack the Puppet Guy.  That’s not his real name.  I don’t know what it is.  I’ve seen him on and off for the last few years along the tourist strip of Michigan Avenue in the Loop.  He puts on a clever little puppet show and occasionally I’ve tipped him because it’s far more creative, and looks much harder, than simply spray painting your clothes in metallic colors and standing on a box.

When I worked at WGN-TV I wanted to feature Jack on one of the local newscasts.  This was back when reporter Jane Boal did features about interesting people around the city.  Alas, I never could catch up to him in those days, and now that neither I nor Jane work for Channel Nine it hardly seems worth the effort.  But I still see Jack popping up occasionally here and there.  He now has a web address emblazoned on his bicycle-powered cart.  Perhaps if he had that earlier I could have made him famous before millions of people across the continent (via SuperStation WGN).  Now I guess we’ll both have to settle for being mentioned in this blog, and its audience of mere tens of thousands. 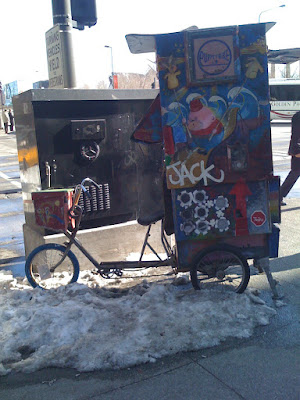