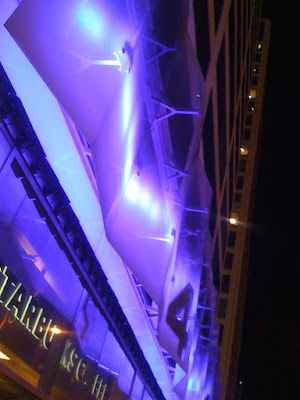 A few years ago the facade of 444 North Michigan Avenue got a minor facelift.  Mostly it was an angular translucent glass visor with the number 444 superimposed on it.  But the best part of this is the nightly LED light show that runs the visor through a riot of colors.  It’s somehow both subtle and startling.  Entertaining without being obnoxious.

444 isn’t the only building in the city with an LED light show.  Check out the office building next to the Goodman Theater Center at night and you’ll see all kinds of shapes and designs light up on parade — even the occasional American flag.