Have You Seen Our Skyline Lately? 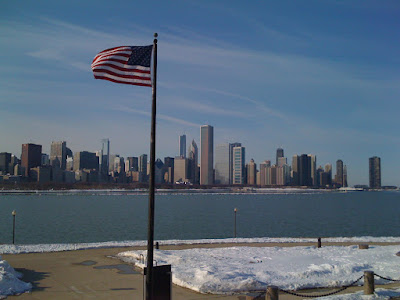 This is what the skyline looks like these days, as seen from the Adler Planetarium (1300 South Lake Shore Drive).  If you haven’t taken a close look at it in a while, you may notice the Legacy at Millennium Park (21 South Wabash Street) sticking up in the middle of the action.  Also the Trump International Hotel and Tower (401 North Wabash Street) makes its presence known in the center, and the Blue Cross Blue Shield of Illinois Tower (300 East Randolph Street) has new prominence now that its vertical expansion is done.

This picture is provided as a public service because the Chicago TV stations do a really awful job of showing what the city looks like.  WFLD tries, but its studio background (“cyc” [pronounced “sike”] in TV lingo) is so over processed and cartoonish it’s hard to believe what you see.  And WGN-TV’s bumps are so archaically outdated that they still show the old Sun-Times building that was torn down six years ago.

So do yourself a favor and click on the picture to see the Chicago skyline in all its glory.  Or at least what my CrappyCameraPhone™ can reproduce.