There are lots of reasons people avoid hospitals.  Superstition. Fear of illness. Feeling guilty about one’s own state of health.  But it should be stated that Northwestern Memorial Hospital’s Lakeshore campus is among the most inviting medical facilities I’ve ever been to.

Even if you’re feeling fine, there are still two good reasons to stop by Northwestern’s Feinberg Pavilion at 251 East Huron Street.  First, it’s because that is the location of the only 24-hour Starbucks in Chicago where you are actually likely to be able to get a seat.  And second, because it contains a hidden museum.

On the third floor of the Feinberg Pavilion is the Florence and Ike Sewell Museum. Or at least that’s what a plaque in the lobby claims.  I haven’t been up there yet, though it is supposed to be open to the general public.

If, like me, you don’t make it past the Starbucks stand, you can still soak in some of Chicago’s architectural history while enjoying your iced venti tuxedo.  The panels on the walls of the Starbucks seating area aren’t just decorations — they’re artifacts. 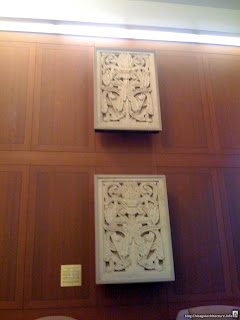 The limestone panels are part of the museum’s collection, and are all that remains of Passavant Memorial Hospital, named for the Lutheran saint William Passavant who founded a number of hospitals and orphanages across middle-America in the 1800’s.

Passavant’s Chicago hospital was the one of the predecessors of the medical monster that is now Northwestern.  Passavant Memorial merged with Chicago Wesley Memorial to form Northwestern in 1972.

While the hospital is long gone, the panels remain.  They depict the leaves of the acanthus plant, which is often used in stylized forms for architectural details.  In this case, the panels are installed on the walls of the new hospital where they exist in plain sight, but most people don’t realize they’re there, or their significance. 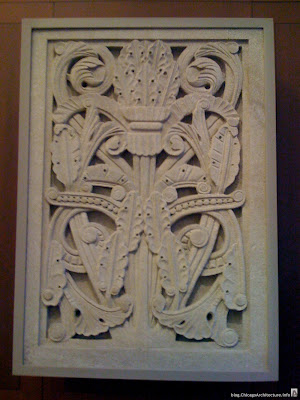