Chicago’s Grocery Store in the Sky

There are a lot of rumors about special places in Chicago that most people don’t get to see.   Today I thought I’d demystify one of them.

A lot of what people assume about the residents and residences in the John Hancock Center (875 North Michigan Avenue) is not true.  But some of it is.  For example — there is an urban legend that the Hancock residents have their own grocery store.  This is true.

It’s officially called “Potash Gourmet 44,” and is not surprisingly located on the 44th floor of the building.  To access it, you must be a resident of the Hancock Center, or an accompanied guest.  You have to go past the security checkpoint on the ground floor lobby, and then the receptionist on the 44th floor sky lobby. 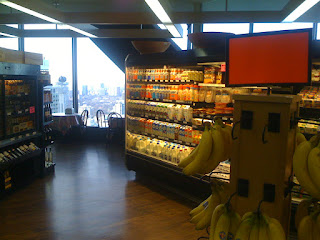 Down the hallway, past the mail room is the grocery store.  It’s larger and better stocked than a convenience store, so it earns its “grocery” title.  The space was entirely gutted and rebuilt in 2008, and has a produce section, a small selection of housewares, health and beauty aides, the usual aisles of canned and boxed goods, a self-service coffee area, and seating so one can admire the view while having a quick nosh.

The most active portion of the grocery store is the deli.  Hancock Center office workers can access the deli via a freight elevator and the back door.  The deli offers the usual selection of sliced meats and cheeses, as well as a choice of hot entrees and sides that change daily.  At one time there was made-to-order pizza, but it wasn’t very good and has since been discontinued. 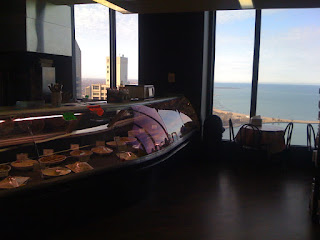 Unfortunately, the grocery store doesn’t photograph very well.  In the daylight, you can’t see what’s in the aisles.  And at night, you can’t see out the windows to prove that the store is in the sky.  But I did what I could with these couple of pictures.

Potash Gourmet 44 is undoubtedly the city’s highest grocery store.  But is it the world’s highest?  It’s hard to say.  It is traditional for people in the Chicago area to declare things the “first” (as in mall), “biggest” (as in block party), or some other superlative without it actually being true.  So in the interest of localism, I formally declare Potash Gourmet 44 is the world’s highest grocery store.  Challenges are welcome.

All your skyscrapers are belong to us
wpDiscuz