The back lobby of the NBC Tower (200 East Illinois Street) is very clean, very shiny, and not used much these days. 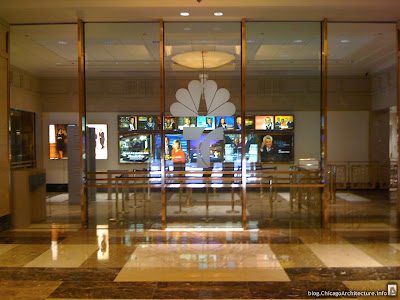 This is the security checkpoint where countless thousands of freaks and their fans went through metal detectors (on the left, click to enlarge) on their way to tapings of the Jerry Springer Show.  Since “Springer” moved to Connecticut, it sits.  Waiting.  And gleaming.

Chicago was once Hollywood before there was a Hollywood.  Then the movie industry moved to the west coast, mostly for the consistent weather.  When radio became big, Chicago was huge, but lost its edge to New York.  Then TV came along and gave birth to another media golden age in Chicago.  Over the years, dozens of TV shows have been filmed in, or at least set in Chicago.  The grandpappy of gabfests, Donahue, was filmed at the WGN-TV Studios (2501 West Bradley Place) in the city’s North Center neighborhood before it moved to New York.  Of course, we still have the Oprah Winfrey Show, but that’s going away, as have Springer, Lykos, Hunt, and others.

There are still a few hold-outs.  Chicago is home to the nation’s last superstation, WGN-TV, which produces a couple of national programs a year.  Cable programs on the Food Network, HGTV, and TLC are constantly scouring the neighborhoods of Chicagoland.  Some segments of NBC’s semi-syndicated LX.TV are filmed in the Chicago area.  And last weekend NBC ran a pilot for a “reality” TV series called The Match Off that was produced locally.