“The Corncob Towers.” “The Pie Spires.” “Aunt Flo’s Curlers.” People may not always know what the twin towers on State Street at the Chicago River are called, but they at least know them.  Bertrand Goldberg’s penultimate architectural creation, Marina City (300 North State Street), has inspired and amazed a generation of tourists and locals.  Now a new book chronicles how the buildings we see today were shaped, and what went on behind the scenes. 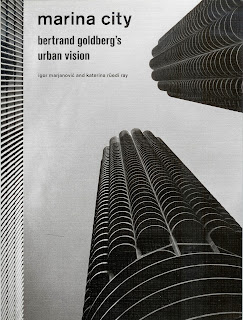 The book is called Marina City: Bertrand Goldberg’s Urban Vision (published by Princeton Architectural Press) and its 176 pages are packed with great information about the development of the buildings, starting from inspiration through construction and on to occupation.

Many people don’t realize it, but Marina City was Chicago, and America’s first downtown revitalization project.  It proved that if you built a city-within-a-city, you could attract people to the urban core where they would live, work, and thrive.  Since then the idea has been copied and expanded in Chicago and around the world.  Today a responsible developer wouldn’t think of embarking on a huge project without considering the live+work+play model.  But in the 1960’s, a time when suburban cul-de-sac developers and auto dealers were demonizing America’s urban cores, this was considered revolutionary.

More than just the story of a building, this book tells the tale of the people behind Marina City — the deals that had to be brokered, the challenges faced, the hurdles surmounted; with enough politics and intrigue to make this a truly Chicago story.

As someone who travels around the world frequently, whenever I mention Chicago to someone, I cringe in anticipation of the inevitable reference to Al Capone.  But did you know that Marina City was celebrated around the world as a new symbol of Chicago’s renaissance?  It was influential enough to supplant Capone as the first notion people had of Chicago.  American Airlines published a guide to Chicago that featured Marina City on its cover.   Even in Cold War-era Moscow, Marina City was known and considered a symbol of the city.

As interesting as all the facts and background material are, it’s the photos that really make this book.  Historic pictures and diagrams of Marina City that show it with the old TV tower still on top.  There are pictures of the skyscrapers when they were new and clean, and not festooned with twinkle lights and blow-up dolls as they frequently are now.  Perhaps if today’s residents of Marina City read this book, they might treat their home with a little more respect and pride.

If you have even a passing interest in Chicago’s history or architecture, I recommend picking this book up.  It’s a quick and easy read and contains a lot of good information.

Note:
This book was sent to me unsolicited by Princeton Architectural Press.  I have received no monetary or other compensation for this review.  If you would like to send a book for review, contact me at editor@chicagoarchitecture.info and I’ll send you the mailing address.

If you’re interested in the book, here’s an Amazon.com link allowing you to buy it at a discount. By using this link, you help financially support this web site.