The Chicago Department of Transportation is going to once again try to straighten out the traffic mess that is East Upper Randolph Street.  The street, which climbs between Millennium Park and the Aon Center/Blue Cross/ Prudential Plaza streetwall is a nightmare for tourists and locals alike.

That’s because whether looking at a map or just navigating on instinct, it makes perfect sense that Randolph would continue the city’s street grid eastward from Michigan Avenue and connect with Lake Shore Drive.

Of course, it doesn’t.

What it does do is make a blind 90-degree turn and come to a dead end in the heart of the New Eastside.

How confusing is this?  Well, on a warm summer afternoon there can be such a flood of confused suburban daytrippers that they actually cause their own traffic jam getting into, turning around, and getting back out of the dead end.

But you don’t have to be an Okie from Muskogee to have trouble here.  I have a photo somewhere of an articulated CTA bus that got caught in this vehicular trap, and had to be yanked out with a tow truck.

To make things worse, this is no longer an industrial neighborhood.  There are several thousand people living there, and crossing the streets in their own backyard is becoming increasingly dangerous as more and more drivers unfamiliar with the neighborhood blow through the asymmetrical stop signs.

I used to live in the middle of this mess, and had a front-row view of it from my bedroom window.  Some days it was fascinating.  Others, not so much.

So, it was with some interest that I received an e-mail from Alderman Reilly’s office recently detailing CDOT’s plans for the area.  I’m going to paste Reilly’s note, and the CDOT diagrams below.

Will the plan work?  Well, trying something is better than trying nothing.  But the problem is that this is a dead end.  There are only two ways to actually fix it:

The upcoming improvements under this neighborhood initiative include:

At the Alderman’s direction and expense through additional Menu funds, CDOT’s bicycle program engineered a number of pavement marking improvements for Upper Randolph Street between Michigan Avenue and Columbus Drive. These improvements include the extension of the eastbound bike lanes on the north side of Upper Randolph Street from Columbus Drive to just west of Stetson Avenue. Shared lanes were recently installed from the end of the old bike lanes down to Michigan Avenue.

On the south side of Upper Randolph Street, between Stetson Avenue and Columbus Drive, the existing eastbound bike lane has been relocated 8 feet off the curb line to keep school or charter buses servicing Millennium Park from parking in the bike lane. The warning signs have been installed in conjunction with the pavement marking recommendations.

Improvement to Intersection of Upper Randolph and Field Blvd:

The Alderman’s office fields numerous reports of vehicles failing to yield to pedestrians in the crosswalk in the east leg of the intersection at Upper Randolph and Field Boulevard.

This dangerous intersection will be “tightened-up” by shifting the crosswalk and stop line on the west approach approximately 35 feet to the east. This will improve driver compliance with the posted stop signs and encourage drivers to yield to pedestrians in the crosswalk.

The City will also be installing new accessible pedestrian ramps, crosswalks and intersection pavement markings at this relocated crosswalk.

Improvement to Intersection of Upper Randolph and Harbor Drive:

Alderman Reilly also receives chronic complaints of vehicles that fail to yield to pedestrians at the intersection of Upper Randolph and Harbor Drive. This intersection will be reconfigured to include a painted median on the curve to provide a buffer between opposing travel lanes. The painted median will also provide an area for pedestrians to stand while waiting for a gap in oncoming traffic – and will encourage slower travel speeds through the narrowing of the adjacent travel lanes.

The City will also be installing additional warning signs to alert drivers to the approaching curve in the road and the presence of pedestrians crossing at the upcoming intersection.

Finally, CDOT recommends the removal of the stop sign and stop line for southbound traffic on Harbor Drive, because the intersection does not meet the necessary stop sign warrants and is inconsistent with the eastbound approach of Upper Randolph that has no stop sign.

There is a stop sign for southbound traffic on Harbor Drive – but eastbound traffic on Randolph is not required to stop at this corner. As a result, pedestrians gain a false sense of security that vehicles will stop at the crosswalk. The Alderman has introduced an ordinance to repeal this stop sign to improve pedestrian safety at the intersection of Randolph and Harbor Drive.

These improvements are scheduled to begin on October 18th and the project is expected to last for 8 weeks. Alderman Reilly is very pleased to announce this exciting project, which will finally address the many complaints we receive regarding traffic and pedestrian safety in the New Eastside community.

Here are the CDOT schematics and plans.  As always, click the pics for larger versions: 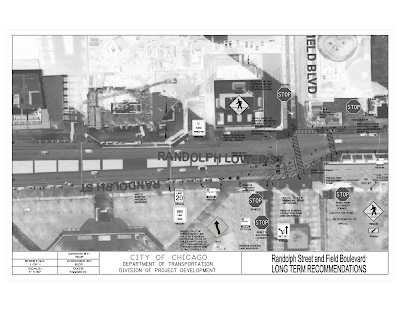 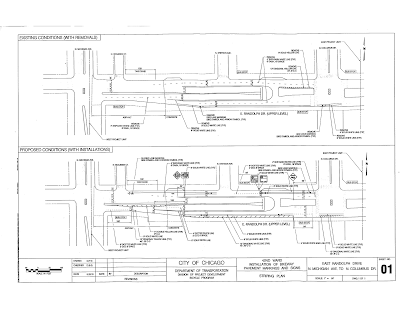 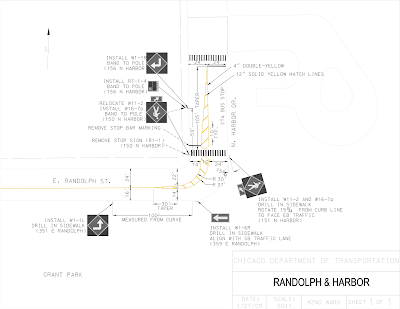